The Sacred Monkey Forest Sanctuary in Ubud (Bali – Indonesia), is about 27 acres (10 hectares) in size, which makes it more of an estate than a forest. But a heavily dense and hilly terrain, intriguing sculptures, 700 year old temples and close to 600 intrepid Balinese monkeys give you the authentic “Indiana Jones adventure” even if you were just looking for a casual afternoon walk.

The forest reserve has three temples mostly closed for general public, unless you happen to be in the traditional Balinese attire and a very pious mood. The area next to the Prajapati temple is used as a graveyard, which would be spooky enough in itself, but the stakes are raised by the fact that these bodies are only temporarily buried there. They lie there in wait of the mass cremation that happens every 5 years.

Jolly charged at the monkey howling a war cry, who looked on curiously but didn’t move.

There are some local villagers that sell bananas and other treats at the entrance of the forest. This is for you to interact with the local monkeys, allow them to get closer to you and have an immersive experience; get your money’s worth, so to speak. The grin on the faces of the villagers, selling these treats, is not just out of politeness. The other tourists would understand the meaning of these grins by the time they returned, I already knew it because of two life changing experiences of my own. 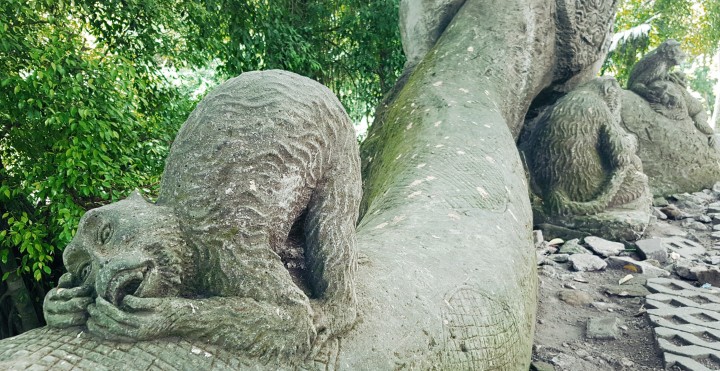 The first one was when I was barely 10 years old and enamoured by all animals, especially monkeys. On one my trips to a local zoo – when my forever attentive father had a lapse of concentration –  I thrust my hand into the cage and offered some leaves and twigs to the elusive monkeys.

After a lot of arm flailing and monkey-esque sounds to grab their attention, one of the monkeys finally approached me slowly. But it didn’t happily gobble up the leaves from my hand as I had breathlessly anticipated. Instead, it sank it’s teeth into the middle finger of my left hand with a ferocity beyond its size.

My cries of shock got my father and others to rush to my rescue before I could lose my finger. The pain waned off in a few days but my friends and family, including the doctor who administered the follow-up injections, never stopped ridiculing me for it.

The second one was when I was visiting my grandparents a couple of years later. They had a 2-year-old, rather loud and annoying Pomeranian (Jolly) that never took kindly to the monkey infestation in the area.

One fine morning, he saw a large male monkey out in the courtyard, enjoying the winter sun. Unfortunately for Jolly and fortunately for us, Jolly charged at the monkey howling a war cry, who looked on curiously but didn’t move.

When Jolly got close, the monkey slapped him smack across the face! Jolly came running right back at the same speed and volume, wailing in pain and shame. The monkey slowly but nonchalantly walked away.

Jolly and I had both learnt our lesson early in life about getting close to monkeys. These unsuspecting tourists buying monkey treats were just about to learn theirs.

I made sure I carried no food or loose items with me that could tempt the monkeys and maintained a safe distance from the people who did. As soon as the monkeys got a whiff of their new bait, they climbed on to these people’s shoulders and heads, grabbed at water bottles and cameras, swung from women’s hair and ran away with their loot.

Some brave souls who struggled and tried to cling on to their belongings got special attention and treatment. Rookie mistake!! By the end of the short one-sided battle, they had eloped with a lot more than just some bananas.

Thankfully no one sustained any injuries. From a safe distance, it was quite amusing to watch all the jumping and shrieking.

Don’t get me wrong. There are ample warning signs on the “dos and don’ts” in the forest reserve, some even in English. If you follow them diligently, you should come out unscathed. But there should be no mistaking the fact that The Monkey Forest is the monkey’s territory. It’s their rules.

Travel with health insurance and leave your toddler behind, unless you want him to grow up as Tarzan.

To me, that is also the forest’s biggest appeal. It is a great place to observe the monkeys in their natural habitat and behaviour.

The fearless attitude of the monkeys in this sacred sanctuary is proof that the good people of the Padangtegal village and the government of Indonesia in general, have succeeded in preserving this delicate balance.

I’ve seen wild animals in captivity before. You can tell how wary they are of human beings. They sense the danger from us, which I am sure, comes from experience.

The monkeys’s fearlessness in this protected forest gives the impression that this place is untouched by man. Adding to the wonder, the 700 year old temples, aging sculptures and light struggling to filter through the dense forest give this place a very “ancient world” kind of feel.

If that sounds like something you’d like to experience, you should definitely visit The Monkey Forest. Just make sure you respect the rules of this mini jungle, or, make sure you have travel health insurance and leave your toddler behind, unless you want him to grow up as Tarzan.

6 thoughts on “Planet of the Balinese Monkeys”

Movies, gadgets and travels… that’s pretty much where my happiness lies.